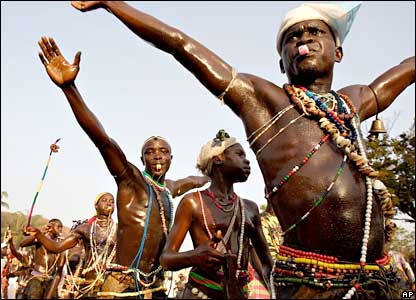 ¡Música!  It will manifest inner strength and help transcend troubles of the material world.  In the case of Guinea-Bissau, a small, perpetually politically-handicapped nation of only 1.5 million humans, the odds against a music industry’s very existence have been overwhelming. ((Manecas Costa’s Paraiso di Gumbe (2003) is considered the first album recorded in the country.  Before then, Bissau-Guineans mostly recorded in Portugal, and neighboring countries Sénégal and Guinea))

Despite the hardships that the people have faced since independence from Portugal in 1974, Bissau-Guineans have created beautiful, culture-unifying music to express their quest for shared emancipation.  Some of the most exceptional music came out of the push for nationhood, as bands such as Super Mama Djombo provided the soundtrack for revolution.

This week’s program features nearly an hour of music spanning the first four decades of Guinea-Bissau’s existence.  The groups display many different degrees of blending between Portuguese and ethnic African influences (chiefly Mandinga and Fula).  I hope you hear something that moves you.

Listen to the sounds of Guinea-Bissau here.