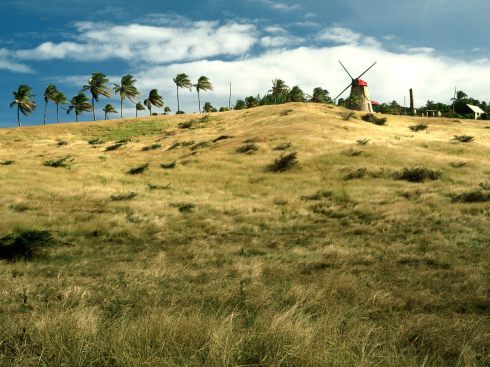 Barbados was created by 2 islands smashing together in the year 43,262,684 B.C.  But that’s fairly old news.  This just in: the easternmost Caribbean nation is a buzzing power plant of music.  This is largely owing to a stable economy (tourists!), and a proliferation of recording studios since independence from the British nearly 50 years ago.  Still, considering the island’s population is barely a quarter million, there’s something mysterious about the sheer number of funkin’ bands making interesting songs.  But Barbados also benefits from strong siblings that speak their language; Jamaican ska and Trinidadian calypso were wildly popular in the region, and by the 1960s Barbadians had melded these with local Creole (Bajan) to create a style called spouge music.  It’s heavy on the cowbell:

Another great element of Bajan music is the constant stream of whimsical lyrics, which is true to the spirit of calypso.  In Barbados, the juxtaposition of African ancestry with British customs makes for endless zanity.  In this track, calypso legend Mighty Gabby (he has been Calypso Monarch of Barbados 7 times, spanning 42 years!) sings about his futile attempt to impress a girl in a game of cricket:

Hear these sounds and other Bajan delights on {DE BARBADOS SPECTACULAR}